5 Differences Between Tangible and Intangible Assets 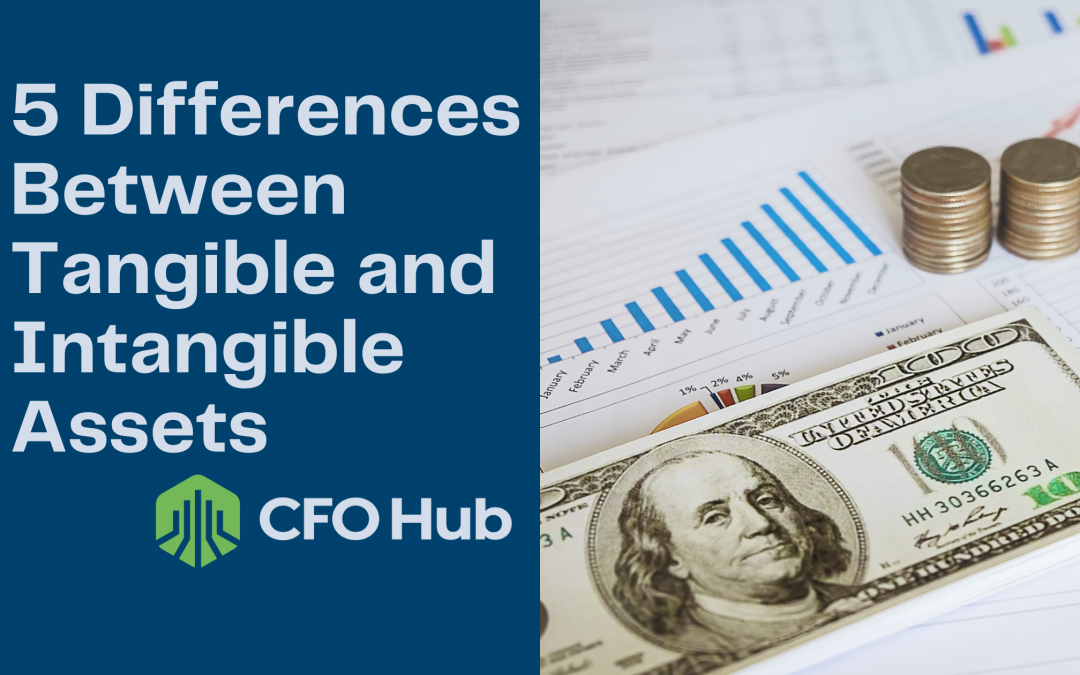 5 Differences Between Tangible and Intangible Assets

A generalized definition of an “asset” is a useful or valuable thing, person, or quality. In the business world, assets can appear in the form of property owned by an organization, a tangible building or computer, or perhaps a trademark or idea which would be an example of an intangible asset.

In this quick primer, the experts at CFO Hub will review the 5 key differences between tangible and intangible assets. First, however, it’s paramount that we define them.

A key defining characteristic of a business’s net worth and operational value depends on its assets. In properly managing its tangible and intangible assets, a company or organization can maintain a healthy balance sheet and ensure operational success. To that end, succeeding in asset management is shown to directly increase an organization’s value.

Tangible assets—as briefly touched on in the introduction—is an asset that has finite monetary value and is usually presented in a physical form. Because of their physical nature, tangible assets are considered less liquid than their intangible counterparts. Additionally, tangible assets carry the potential for higher expense risk due to the need for proper storage, insurance, and obsolescence.

Examples of a Tangible Asset

On the other hand, intangible assets are types of assets that have no physical properties that a business or organization can create or acquire. Intangible assets are classified as either indefinite or definite, which is to say that the asset will stay with them in perpetuity (indefinite) or until there is an agreement to operate under another company’s management with no plans of motioning for perpetuity (definite).

While intangible assets carry no physical form or value, they still prove to be invaluable when developing a balance sheet.

Examples of an Intangible Asset

In which case, there are many different ways that a company receives both tangible and intangible assets, as briefly defined above. To take a deeper look at the differences between them, we have compiled 5 key differentiators that should provide clear and concise orientation.

#1 A Difference in Use Between Industries

Most companies choose to employ a mixture of both tangible and intangible assets because it is a better method to diversify an organization’s balance sheet. With that caveat, some industries make use of one more than the other.

Companies and organizations that find themselves in the manufacturing field will have robotics, machinery, and other physical components that are categorized as tangible. Some examples include but are not limited to:

Some companies and businesses focus more on intangible assets—such as patents and intellectual properties—many of which also include tangible assets mentioned above.

Collateral refers to a form of debt financing in which an individual puts their physical assets forward to secure credit or a loan. A business owner can use equipment, facilities and properties, and even company vehicles as a form of collateral. This means that if the loan is not properly repaid, the lending institution can seize all the assets put forth by the company.

This cannot be done—traditionally—with intangible assets, as an idea or a brand cannot have guaranteed selling value. With the evolution of technology, however, there will surely be a new approach to establishing more widely applicable use for intangible assets as loan collateral.

Tangible assets have clearly defined value, as most company assets are usually accompanied by a price tag. A specified piece of manufacturing equipment will cost X amount which will gradually depreciate over time through use (think: buying a new car and taking it off the lot).

Intangible assets have no definitive value, however, as one cannot put a price tag on the value of a brand or an idea. A way to establish value is to reach out to valuators whose appraisal is trusted in the marketplace. When an expert in the field affirms perceived value, it can solidify an associated price for intangible assets.

Liquidating an asset is essentially selling an asset should the company need more capital. This is often used when a company is going out of business and looking to recoup some of the losses.

The difference between liquidating tangible and intangible assets lies in the obvious physical versus non-physical. Similar to determining their value, a company can put a definitive value on a piece of equipment whereas assigning a value to their brand name must be defined over time.

A paper asset holds multiple meanings in the business realm. When discussing tangible and intangible assets, however, paper assets are presented as “representations of something”.

They represent intangible assets or items that are associated with a perceived value (bonds, stocks, investments) and are largely dependent on investors and the general public’s backing of their value.

Hard assets exist contrary to paper assets, much like tangible assets do to intangible assets. They come in various forms but are largely represented in physical capital, such as gold, silver, land, and oil. The prices and value associated with hard assets may change depending on the supply and demand of the market, but will always hold some sort of physical value.

Juggling the differences between tangible and intangible assets is no easy feat (especially if there is not an assigned value to work with). Additionally, identifying what assets your business should invest in is an exercise that should be treated with careful consideration.

For that, the team here at CFO Hub is here to help. Whether you need an outsourced controller, a bespoke, plug-n-play CFO, or help valuing the assets you’re considering, we can provide the financial guidance you need and more.

Contact Us
Related:  What Is the Role of a CFO in Mergers and Acquisitions?